Ancient Egypt was one of the oldest civilizations to ever exist and was located in northeast Africa. It started off as an agrarian society, in which people farmed their crops on the fertile grounds of the river Nile. With desert surrounding a lot of the country, ancient Egyptians were fairly isolated from other civilizations, which over time allowed them to build their own culture and empire that stretched across a vast span of time under many rulers and dynasties.

Egyptian society honored gods at the very top of the social ladder, and then came the pharaoh, who was the ruler and regarded as a god in the body of a human. Nobles, priests, and other government officials who served the pharaoh were under him and the middle of the ladder was constituted of soldiers, blacksmiths, scribes, and merchants. The bottom was made of farmers and servants/slaves.

Relative to its time, ancient Egypt was more egalitarian than other civilizations in the world; Egyptian women were allowed to own property, divorce their husbands, and were legally equal to men despite living in a society dominated by patriarchy. Some even went on to become influential pharaohs. Although women had quite a few opportunities, a lot of them stayed back home and did housework and cared for children while the men went outside and worked jobs or farmed to provide for their families.

In the prehistoric stages of Egypt, the country was divided into 2 separate kingdoms of Upper and Lower Egypt, which were eventually united into a single kingdom ruled under a pharaoh who had absolute power. The government structure was one of a theocracy (a government in which the ruler declares credibility and power from a god). In Ancient Egypt, the pharaoh was thought to be an intermediary who carried out the will of the gods. The vizier was second in command to the pharaoh and the highest-ranked government official. Below the vizier was nomarchs, who governed Egypt’s provinces (nomes). Then came noblemen, scribes, and other government officials.

Over the span of time during which the ancient Egyptian civilization existed, it saw multiple dynasties rule or foreigners who took over. Foreign powers influenced Egypt through invasions, with Nubian invasions from the south and Hittites from modern-day Turkey, and Persia from the East. Sometimes these invaders succeeded in taking over a part or entirety of the country, which allowed their culture, government, and goods/technology to diffuse. In 332 BCE, Alexander the Great captured Egypt and left one of his generals, Ptolemy, in charge there which started the Ptolemaic dynasty, the first Greco-Egyptian dynasty and the last dynasty to rule Egypt under Cleopatra. After Cleopatra’s death, Egypt got annexed to the Roman Empire.

Multiple pharaohs largely influenced Egypt throughout its course of time. Ramses II, often regarded as the greatest pharaoh, expanded the borders of Egypt through conquering neighboring kingdoms and built a lot of monuments, the most famous one being his temple of Abu Simbel. Female pharaohs also left their mark on Egypt; Hatshepsut expanded foreign trade routes and relations, and Cleopatra was the last pharaoh of Egypt who allied with the Romans to gain power from her brother, which cast Egypt into a civil war and eventually led to the civilization’s end. 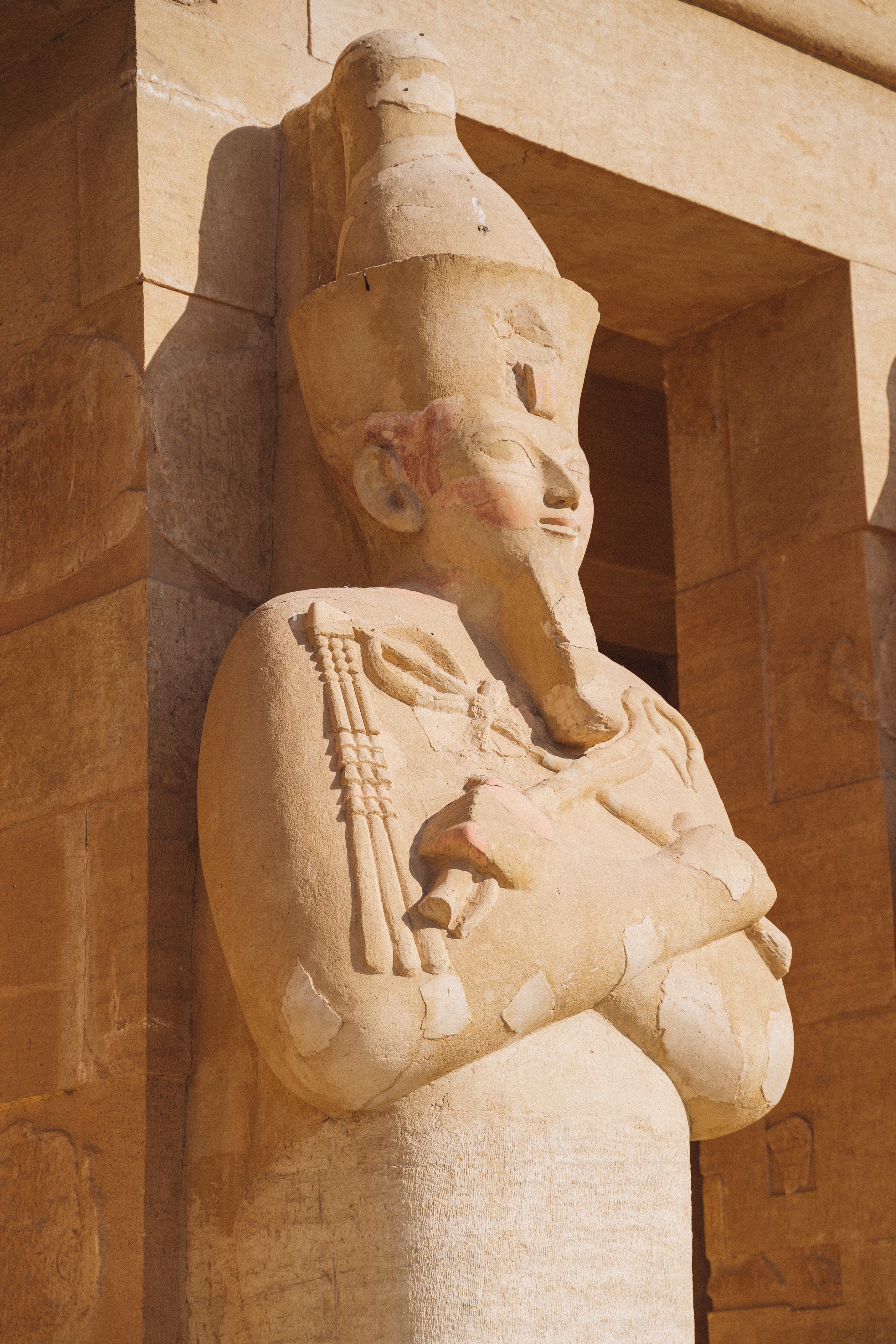 Interaction with the Environment

The ancient Egyptians depended on the Nile for practically everything, and without it, Egypt itself would not exist. The ancient Egyptians’ interaction with this river shaped much of their civilization. The Nile provided for a reliable water source which was essential since most of Egypt was desert and experienced little to no rainfall. The river’s annual floods deposited nutrient-rich soil on the river banks, which made it optimal to plant crops there. Ancient Egyptians also devised an irrigation system to divert the Nile into providing water sources and fertile soil for farmland. Due to a stable food and water source available near the Nile, most cities were located along the Nile or next to the Nile Delta, such as Memphis and Alexandria.

Egyptians also developed boats to sail along the Nile for transportation. The river also supported a vast ecosystem of a lot of animals and wildlife; Egyptians hunted waterfowl and fish for food and ibises and flamingos for trinkets. The reeds and other plants on the banks of the Nile were used to make papyrus paper, on which people could write. To travel vast spaces of deserts, camels were domesticated to carry people and goods. People who lived in the desert inhabited areas around oases (water sources in the desert), an example of this being the Siwa Oasis settlement in western Egypt which had very fertile grounds where people planted date palm trees to trade. 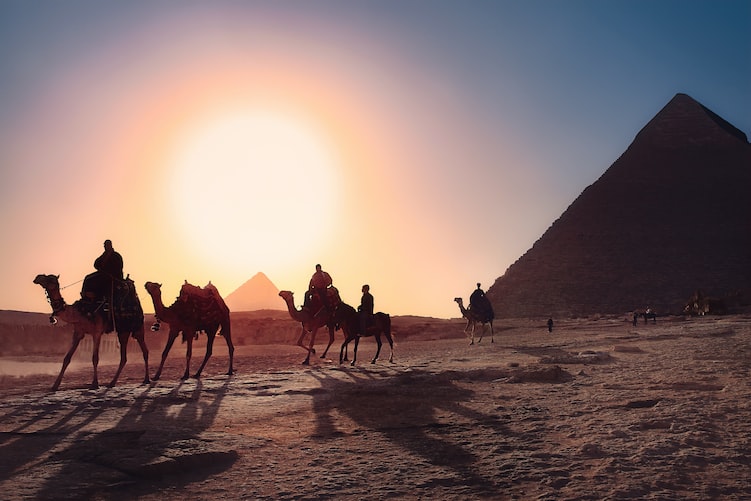 Camels were essential for desert transportation 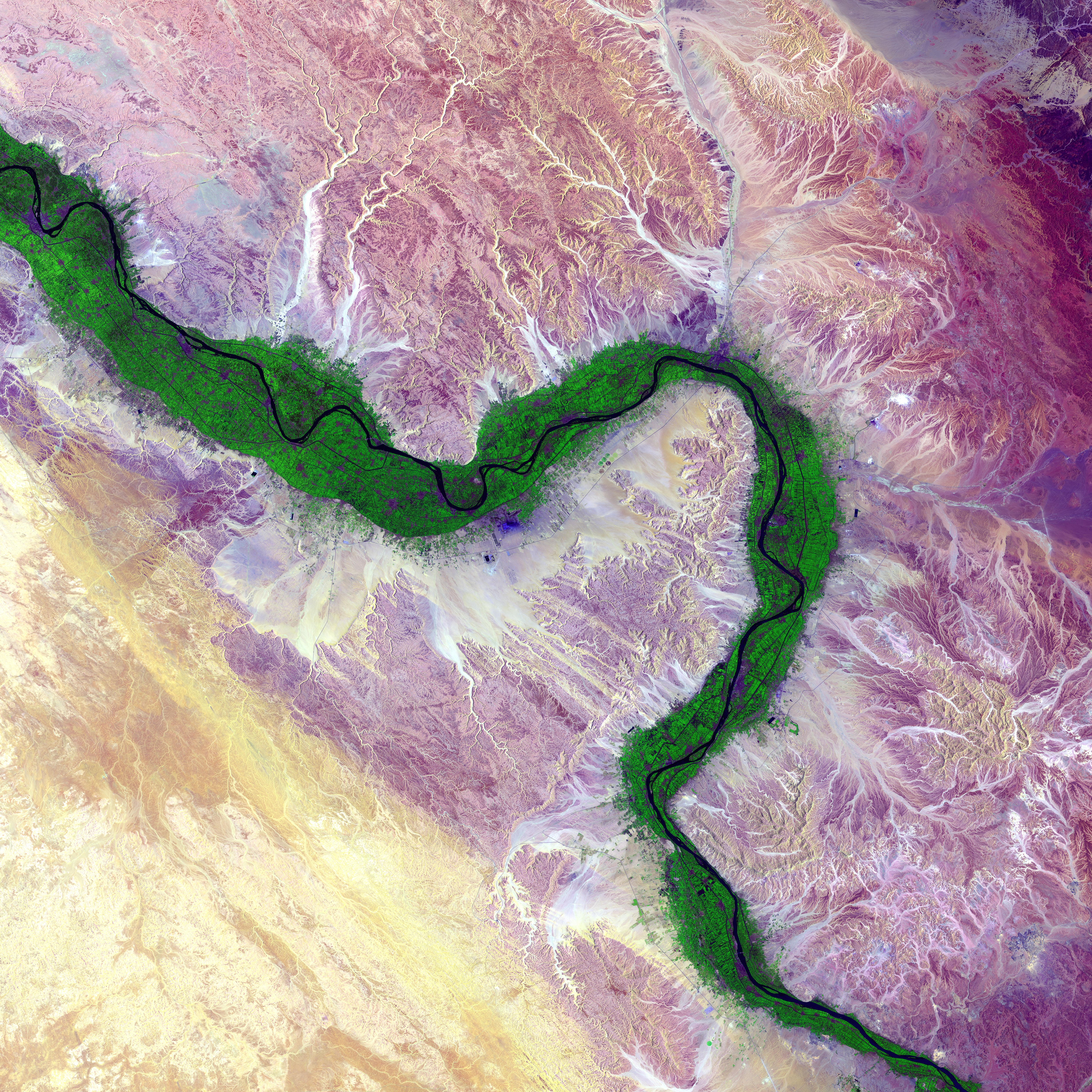 This satellite image of the Nile shows the green area where farming was possible compared to the hot and dry desert beyond, where agricultural practices could not occur. Without the Nile, the Egyptians could not have relied on the desert as a food and water source and would die of starvation/dehydration.

Ancient Egyptian culture developed uniquely due to its isolation from other civilizations by the desert and seas. Egyptians followed a polytheistic religion (a religion with more than one god), which had bodies of humans but the head of animals. Large temples were built in their honor, the most popular gods being Ra (the sun god), Osiris (the god of the underworld), Isis (the goddess of the home), and Horus (the god of kingship and power). Religion played a major part in Egyptian society, as priests held a lot of power and the pharaoh himself carried out ‘the will of the gods’.

A fascinating part of the ancient Egyptian religion was the posthumous rituals involving large tombs in pyramids and mummification. After a pharaoh’s death, the body would go through a long process of mummification to preserve the body and be put to rest in an adorned sarcophagus in a tomb filled with the pharaoh’s riches. Sometimes, even his human servants were buried with him to help him in the afterlife.

The tomb would be inside a pyramid, which took years to build and these pyramids became one of the defining features of ancient Egypt. Burials for common citizens were not as extravagant as the ones for pharaohs and nobles, they were not buried in pyramids. Some Egyptians even buried their cats as they were important animals in their culture. The ancient Egyptians also created the hieroglyphic script, a writing script made up of images, which can be found on the walls of tombs. Other writing scripts and languages were also developed in Egypt over time, such as Cuneiform (diffused from Sumerian civilization), Demotic, Coptic, native Egyptian, and later Greek during the Ptolemaic dynasty and Latin after the Romans took over. 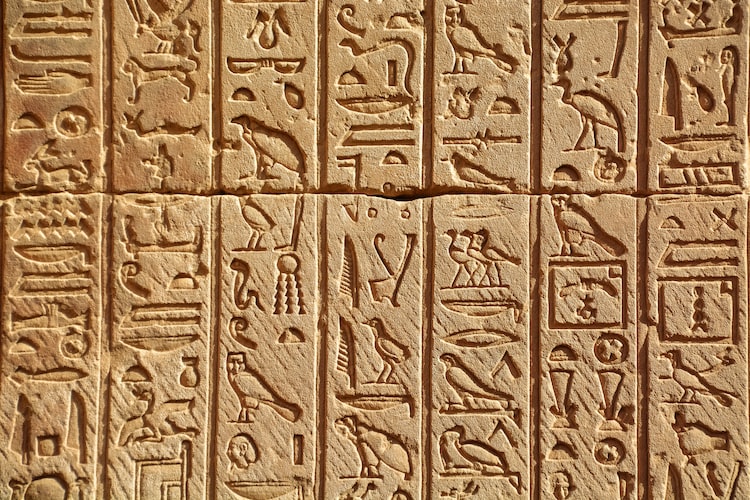 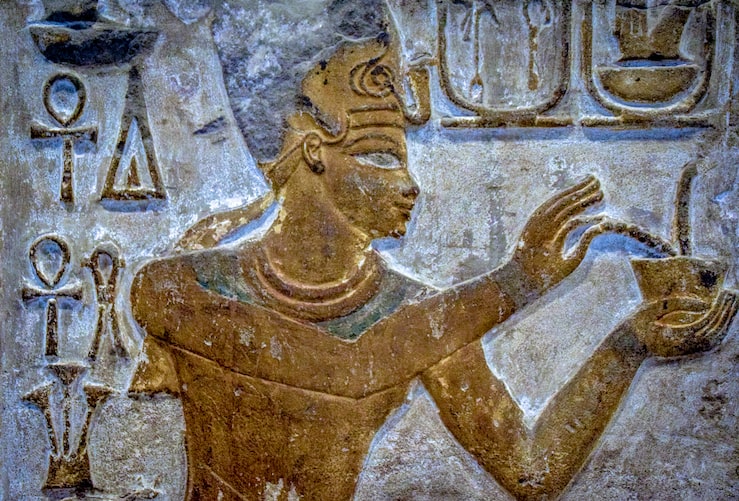 Depiction of a god

The economy of ancient Egypt was mainly based on agriculture and bartering crops for other goods. When the Persians invaded, they introduced a monetary system that was implemented instead of the barter system. The economy was controlled by the government, specifically the pharaoh and his vizier. Taxes on citizens were also implemented, for example, farmers had to pay their taxes in the form of a percentage of their annual crop yield. After the development of boats for transportation, Egyptians started trading in the Mediterranean, southwards from the Nile, and into the Red Sea. Egyptian papyrus was in high demand from a lot of places. Egypt made use of land and sea trade routes to sell their goods and obtain other ones. 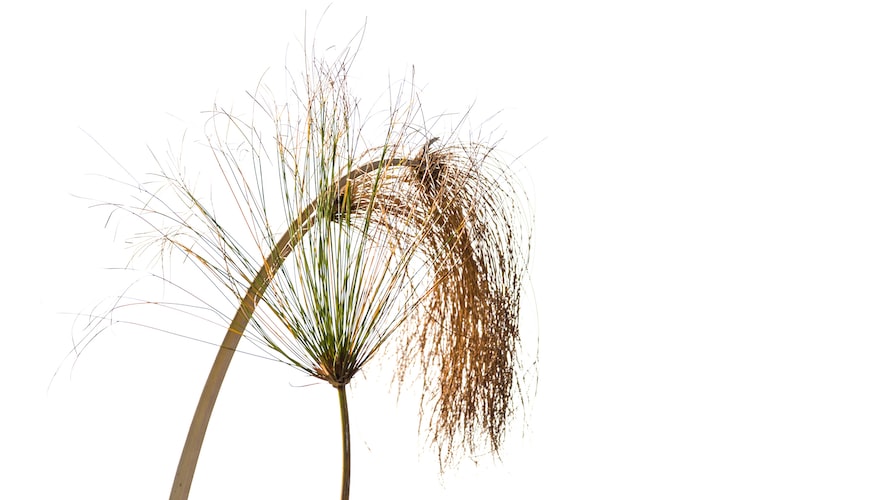 What do you think?

Let us know in the comments.

Hello! My name is Arya Rane and I am currently a sophomore at Lambert High School. I always had an interest in animals, especially exotic wildlife, and love the field of medicine. I am an aspiring wildlife veterinary doctor and I have been increasing my experience in the field through competing in veterinary science events in HOSA and hope to maximize that experience with internships. My hobbies are reading, playing sports, connecting with friends, socializing with new people, and competing in clubs and events.

Classical Japan was an era of civilisation that lasted over five centuries. Succeeding the Kofun period, Classical Japan began with the spread of Buddhism in the 4th century. Many changes were made to the Japanese...

For those who understand the geography of Japan, you would remember the Ryūkyū Islands to be a peaceful place with beautiful beaches and clear waters. Situated southwest of the Japanese archipelago, today’s Okinawa...

What do you think of when someone tells you about Japan? The first few things that come to mind would probably be the food – sushi and sashimi, ramen, and udon. Some of us would probably think of its culture, where...